In a memorandum dated March 28, 1941, the Director of the Federal Bureau of Investigation strongly suggested that Joseph F. Rutherford, then president of the Watchtower Society, be closely monitored and potentially arrested “…in the event of a national emergency.”

J. Edgar Hoover (the FBI Director) was very aware of Rutherford’s political positions during the late 1930s and 1940. He knew that Rutherford decreed that Jehovah’s Witnesses should not support any war preparation efforts, not salute the flag of any country, and to avoid military service of any kind – even under threat of arrest or imprisonment – or death.

Hoover’s memo makes it clear that “Judge” Rutherford had been monitored for some time by the United States Government. In fact, he mentions that a dossier on Rutherford was being sent along with the memo. It was likely that Rutherford’s praise of Adolph Hitler and the leaders of other “fascist” countries during the late 1930s created some “red flags” within the FBI and other government agencies.

It was also significant that Rutherford and other Watchtower officials had been arrested, convicted and imprisoned for a short time in 1918 and 1919 – for taking anti-government positions during World War 1. [See Wikipedia quote below.] While the Watchtower leaders’ convictions were overturned and they were eventually released from prison in 1919, Rutherford continued to preach loud and often against the political systems of the world and their armies. He often accused various governments of being in league with and led by Satan the Devil – and wars were clear evidence that his position was valid. Rutherford also severely criticized the world’s major religions – especially the Catholic Church – for supporting war efforts by the world’s governments.

In 1941 Hoover’s FBI was (and to some extent, still is) perhaps the most powerful and influential police force in the world. What Hoover asked for he got. No other government agency would take a stand against him or the FBI. Even the most powerful politicians avoided any conflict with him, preferring to “turn a blind eye and a deaf ear” to Hoover’s sometimes excessive use of authority. 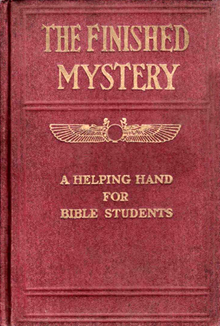 In early May 1918 US Attorney General Thomas Watt Gregory condemned The Finished Mystery as “one of the most dangerous examples of … propaganda … a work written in extremely religious language and distributed in enormous numbers”. Warrants were issued for the arrest of Rutherford and seven other Watch Tower directors, who were charged under the 1917 Espionage Act of attempting to cause insubordination, disloyalty, refusal of duty in the armed forces and obstructing the recruitment and enlistment service of the U.S. while it was at war. On June 21 seven of them, including Rutherford, were sentenced to 20 years’ imprisonment. Rutherford feared his opponents would gain control of the Society in his absence, but on January 2, 1919 he learned he had been re-elected president at the Pittsburgh convention the day before, convincing him that God wanted him in the position. In March 1919 the directors were released on bail after an appeals court ruled they had been wrongly convicted; in May 1920 the government announced that all charges had been dropped. [LINK to Wikipedia article]

Less than a year later, on January 8, 1942, “Judge” Joseph F. Rutherford died in San Diego, California from cancer of the lower bowel. He lived just long enough to see the United States enter World War 2 one month earlier. After nearly twenty-five years of unrelenting scathing attacks on the world’s governments and churches, his voice was silenced forever. But many of his Jehovah’s Witness followers he left behind did refuse military or government service during the World War, Korean War, and the Viet Nam war and some of them spent years in prison.

Find Articles and Documents by Subject, Name, or Keyword

Find Articles and Documents by Subject, Name, or Keyword